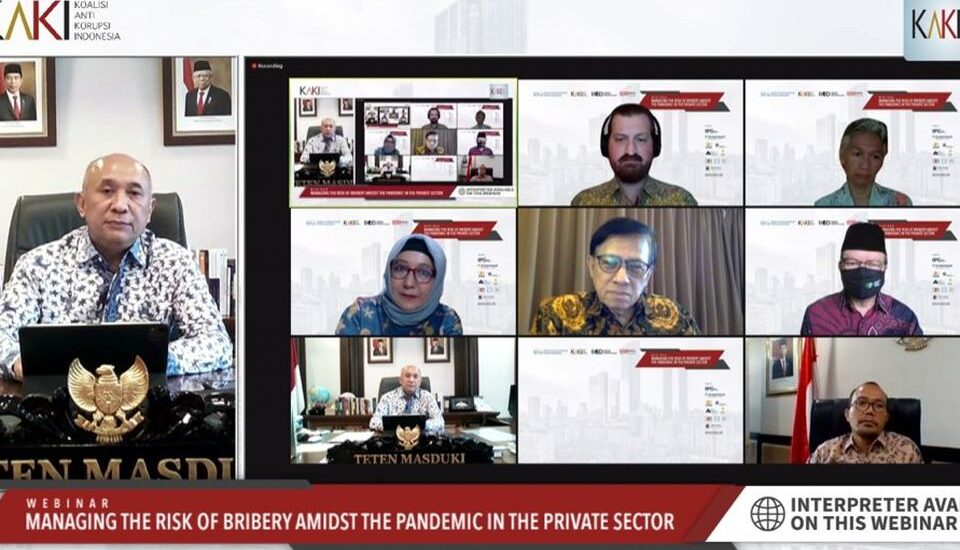 Jakarta. The corruption scandal in government’s social assistance program that led to the recent conviction of former Social Affairs Minister Juliari Barubara is a bombshell to the people still facing the devastating economic impact of the Covid-19 pandemic.

But for anti-corruption activists, such news is anticipated.

“Corruption often thrives during times of crisis, particularly when institutions and oversights have been weakened and public trust is low,” Erry Riyana Hardjapamekas, chairman of the Indonesian branch of the Coalition Action Initiative Against Corruption (CAC), said in a webinar on Tuesday.

Juliari was found guilty of accepting bribes from companies that won government projects worth trillions of rupiah to procure and distribute basic supplies to the poor affected by the pandemic.

He was sentenced to 12 years’ imprisonment and has stated he won’t appeal.

A number of businessmen were also convicted of the bribery scandal.

In fact, the private sector is accountable for the highest number of graft convicts in Indonesia.

According to the Corruption Eradication Commission (KPK), there have been 308 businessmen or private company employees convicted of corruption between 2004 and 2020.

The second-highest number of “corruption actors” is lawmakers and regional councilors, totaling 274 people. Coming third is high ranking civil servants with 230 of them. There were also 122 mayors and district heads as well as 21 governors convicted of corruption during the period.

The pandemic has forced governments across the world including Indonesia to make urgent purchases of goods and services especially medical supplies and allocate a significant amount of the budget for humanitarian assistance, Erry said.

Under such a circumstance, regulations tend to be loosened, opening way to corrupt practices involving both state officials and the private sector.

“Most governments were not ready for the Covid-19 pandemic and response plans do not give enough consideration to governance and problems of corruption,” said Erry, who is also a former KPK commissioner.

He warned that corruption cases “would impinge on the effectiveness of efforts to contain the pandemic and involve unnecessary cost overruns that could impact health care for thousands of people”.

Big Budget
The pandemic also prompted the Indonesian government to significantly raise health budget to its biggest amount in history, valuing at Rp 132.2 trillion in 2020 or an increase of 13 percent on the budget a year earlier.

The bigger the budget, the greater the need for transparency, accountability and, ideally, public participation in the decision-making process, said Natalia Soebagjo, a senior member of global anti-corruption movement Transparency International.

The 2021 health budget was cut to Rp 169.7 trillion, with most spending allocated for vaccine procurement and premium subsidies on state health insurance.

“Regarding the procurement of vaccine, TI has done some research on this particular subject and we have identified that this process of procurement is prone to corruption,” Natalia said.

She said contract and pricing agreements between governments and pharmaceutical companies often remain confidential or opaque.

Natalia, however, stopped short of telling that that is the case in Indonesia.

“Some companies have confidential agreements to protect them from future disputes. And also there is a lack of transparency during R&D process,” she said.

Any government must answer key questions about Covid-19 vaccine, including which vaccine they acquire, how many doses have been secured, when the vaccine will be delivered, how much they paid for each dose, and whether they have a single website with real-time and thorough information about vaccination drive.

“I think that to a certain extent the Indonesian government has tried to fulfill or answer those questions but of course a lot more could be done,” she said.

The Health Ministry recently launched a website containing real-time vaccine stocks and availability down to the district level in order to allow transparent vaccine supplies to regional governments.

Through the website, everyone can check delivery volume, the amount of doses administered and the outstanding stock in their respective area.

A pre-pandemic survey by Transparency International found that three in ten respondents admitted to having paid bribe in order to access public services.

“And 80 percent of the respondents also confessed that they had to use their personal connections to get access to better public services,” Natalia said.

Collective Actions
While the government is making efforts to ensure predictable and fair business climate, challenging government officials or powerful people asking for bribes can be intimidating for companies, according to excerpts from the webinar.

A single company advocating for changes in policy can be ignored, but with a group of companies all moving together, advocacy becomes loader.

Not just in Indonesia, the world is moving towards greater anti-corruption convergence applying to multinational companies wherever they operate.

Many countries have adopted tougher regulations against private sector bribery, such as the Foreign Corrupt Practices Act in the United States, the Anti-Corruption Commission Act in Malaysia, and the Bribery Act in the United Kingdom.

For its part, the Indonesian Supreme Court has issued Regulation on Corporate Criminal Liability that allows business entities to be prosecuted for corruption.

“In the US, for instance, the five largest Foreign Corrupt Practices Act settlements and fines have all occurred in the past four years. The US is taking this increasingly seriously and there is an impact on companies in Southeast Asia as well,” he said.

“Companies that operate internationally understand this and so they are increasingly looking for partners to comply with anti-corruption laws not only in paper but in practice as well and taking the steps to make their corporate behavior as safe and ethical as possible.”

There are also international agreements and commitments, such as the OECD Anti-Bribery Conventions and the UN Convention against Corruption.

“These trends mean that for corrupters, there are fewer and fewer places to hide. And really in order to be a modern and effective and competitive business, ethical business is frankly the only way to go,” Haynes said.

“We’re attempting to work collectively to stand together to share experiences, to act as a group despite many potentially conflicting interests that face many companies in Indonesia.”

Speaking at the same webinar, Chief Economic Minister Airlangga Hartarto welcomed the initiative for concerted efforts by companies in tackling bribery, which he said will promote “law-abiding business ecosystem for the private sector”.

“Bribery and corruption risks often occur during times of crises, including the Covid-19 pandemic, due to a number of factors such as turbulent financial climate, the shift of focus from economic activities and the increasing health risks from Covid-19,” Airlangga said.

“Like the government, the private sector is also being faced with challenges to balance speed and control in company operations.”

But in practice, the financial management involves an oversight from various agencies including the Supreme Audit Body (BPK), the State Development Finance Controller (BPKP), the National Police and KPK, he said.